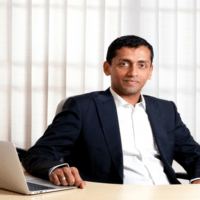 During my search, I have stumbled upon one guy whom I believe to be an intelligent fanatic in all rights. He is this guy.

His name is Arun Chittilappilly and he is an intelligent fanatic.

To begin with, he runs Wonderla Holidays which owns the iconic wonderla amusement parks in Kochi, Bangalore, Hyderabad and are in the process of setting up their new park in Chennai.

Let’s examine him on the parameters of Intelligent fanatics:

#Integrity – Arun comes from a family which runs V-Guard Industries, Mr. Kochouseph Chittilappilly himself have been one of the most brilliant entrepreneurs in India who heads V-Guard group and the group is known for its ethical way of operations and corporate governance.

Digging deep, I found that the company is actively involved in Corporate Social Responsibility initiatives and Executive director Priya Sarah Joseph looks after the working of these initiatives.

All I found on the Integrity part were Green Flags waving high.

#Energy – Arun is always high on energy, he is the go-getter in his approach and he has been crazy about visiting new parks built in different parts of the world and he works hard to match the same quality, safety and service parameters at his company. He commands high respect for Disney and other parks for their efficiency , management , service quality , maintenance,innovation and he takes inspiration to make Wonderla one amongst them.

#Intelligence – His Intelligence is well proven from the fact that he has built this company from one park in Kochi to four parks in India and he did that in an industry which has been dull in India from its inception. The industry runs on high capital, high maintenance ,upkeep and none of the promoters has run it like core business activity but this guy is here to change that, he is focused on growing this company and he is doing it quite well.

He runs low on debt and does major expansion from internal accruals, Debt level is almost nil.

He went into backward integration and developed an in-house manufacturing facility for constructing rides to save money on importing such rides from other countries. This low operating cost gives a competitive advantage over the new entrants and makes it a moat business as the cost to create what wonderla already has is very very high.

He has a very strict policy when it comes to Safety of its customers and highest standards are being placed at every park for the safety of its visitors and it has resulted in minimal incidents of the mishap at his parks.

He stands out well on all the three parameters making him an intelligent fanatic.

Now, Amusement park industry is an entertainment business which is in its starting growth phase in India and as the disposable income of Indians keeps growing the footfalls in these parks will also keep growing. This story can be directly linked to the ever growing middle-class families of India and increase their spending capabilities.

And as Charlie Munger says “If you get an opportunity to get into a wonderful business that’s being run by an intelligent fanatic and if you don’t load up, it’s a big mistake.”

Note: This is not an investment advise rather just a way of studying people who build great businesses.

CA Harsh Saraswat, He is a Chartered Accountant and an Equity Enthusiast he can be reached at his twitter handle @harsh_jaipur

How to invest in US market from India? International Mutual funds

Thanks for subscribing! Please check your email for further instructions.