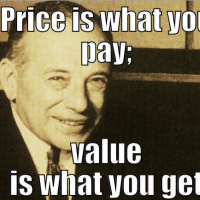 There are three market categories of companies in market depending on their market capital, the large caps, small caps and mid caps. There is also a fourth category called micro cap. These are the companies which have market capital of less than 100 crore. The small and midcap companies can increase their profitability faster than large cap.  A 100 crore company can become a 130 crore company with 30% growth in a year but for a large cap company of 1000 crore cant easily become a 1300 core company in a year with same growth in a year. Stocks with  potential of high growth rate are loved by the market and they move faster than large caps. But its very difficult for a small size company to survive in adverse conditions. Many small companies dies in few years of adverse economic situations. In general large caps gives you more safety but small and midcaps has more growth potential. This is not true for everyone, depends on the type of business as well. What Graham says is that you should avoid very small size companies stocks for investment as they could get badly affected in adverse situations.  Graham says to avoid investing in companies having annual sales of less than $100 million (600 crore) and total assets of $50 million (300 crore)

Any company can make continuous growth only when it has sufficient capital to survive in all kind of conditions. If any company has too much debt then it can’t invest in anything new for the growth. Its most of the earning goes in paying the debt interest. When the economic conditions are not favourable the profitability is in pressure then it becomes even more difficult to survive. You can find so many examples of heavy debt companies that became bankrupt. For industrial companies current assets should be at least twice the current liabilities. Also the long term debt should not exceed the net current assets or the working capital. Debt should not exceed twice the stock equity at book value.

For long term investment you should select the company which has stable earning. Check the balance sheet and look for the annual earning figures for 10 years. This will give you the clear picture about the earning stability.

Also Read: How reliable is EPS in deciding the stock performance

Buying a good stock at wrong price is many times as bad as buying the wrong stock. You should not buy even the fundamentally strong stock at a high price. Benjamin Graham uses P/E to judge if the stock is not over priced. He says current price should not be more than 15 times average earning of the past three years. Check more about financial ratios

Current price should not be more than 1.5 times the book value.

Graham recommends to invest in the stock which has history of uninterrupted dividend payments for past 20 years.

Benjamin Graham specially recommended the above seven things for defensive investors. If these recommendations are applied the investor will be able to filter out most of the common stocks. He will filter out too small companies having weak financial conditions and not having continuous dividend paying history.

10 Best Books on Investing in Stocks For Beginners