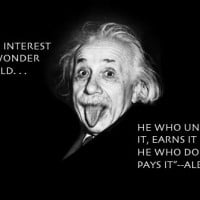 Albert Einstein said “Compound interest is the eighth wonder of the world. He who understands it, earns it … he who doesn’t … pays it.”

To understand it better let me tell you a story, which you might have already heard.

Long ago, there lived an Emperor. Once the emperor asked his folks to show him something, so amusing that would sweep his mood. A man came up with his invention in his hand and presented it to the emperor. It was a chessboard. The new game was one of its kinds and the king was so happy that he said- “Name your reward!“

The man responded, “Oh emperor, my wishes are simple. I only wish for this. Give me one grain of rice for the first square of the chessboard, two grains for the next square, four for the next, eight for the next and so on for all 64 squares, with each square having double the number of grains as the square before.“

The emperor was surprised that the man had asked for such a small reward. Nevertheless, he ordered his men to give the amount of rice as the winner wanted. A week passed but the reward was yet to be given to the winner. The treasurer was called to justify the delay. The poor treasurer informed him that the reward would add up to an astronomical sum, far greater than all the rice that could conceivably be produced in many centuries!

The emperor was amazed and his eyes popped up as he was narrated the Math behind the wish. The calculation went like this-

Applying the same rules to the investing and considering that we earn 15% p.a.

The investment amount turns out to be more than 16 times and it`s tax free. If we consider dividend income too, it will be around 18 times. The key is the power of compounding, the snowball effect that happens when your earnings earn more money for your account.  You receive interest not only on your original investments, but also on any interest, dividends, and capital gains that accumulate—so your money can grow faster and faster as the years roll on. Same as a small snowball turns into a giant one as it rolls on.  Check out how you can become crorepati with power of compounding by saving 30 Rs a day.

Well who don’t like a rising income curve, the mantra is simple. Invest today, be patient, reap the benefit manifold. Do not kill the goose, feed it and see it grow and earn for you.

Kashish is an aspiring Chartered Accountant. Active trader in Equity and Currency markets since 2012.

Get All News On Your Stocks & Shares With Google Alerts